GET RID OF MOLES

Moles are small mammals that spend most of their lives in underground burrows. They are seldom seen by humans. When seen, they frequently are mistaken for mice or shrews.

Moles have high energy requirements and thus have large appetites. They can eat 70 to 80 percent of their weight daily. They actively feed day and night at all times of the year. Moles feed on mature insects, snail larvae, spiders, small vertebrates, earthworms and, occasionally, small amounts of vegetation. Earthworms and white grubs are preferred foods. 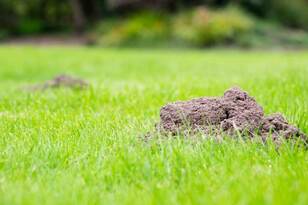 Mole activity in lawns or fields usually appears as ridges of upheaved soil. The ridges are created where the runways are constructed as the animals move about foraging for food. Burrowing activity occurs year-round but peaks during warm, wet months. Some of these tunnels are used as travel lanes and may be abandoned immediately after being dug. Mounds of soil called molehills may be brought to the surface of the ground as moles dig deep, permanent tunnels and nest cavities.

Moles breed in late winter or spring and have a gestation period of four to six weeks. Single annual litters of two to five young are born in March, April or May. Young mole  are born hairless and helpless, but growth and development occur rapidly. About four weeks after birth, the moles leave the nest and fend for themselves.

Some of our Control  methods include trapping , poisoning runways and running Carbon Monoxide into the Moles run ways and breeding Mounds . Our normal treatment will include 4 - 5 trips to your residence treating new mole activity each trip until we come and see no new sign . This will complete the job at this time .
New Moles will return sooner or later and will have to be treated again for another charge .
Mole charges will be based upon the size of your yard and the amount of damage that has been done .